In Roman mythology, Janus is the god of beginnings and transitions, a two-faced god that looks both into the future and back to the past. January was named in his honor, a month when people reflect on the previous year while looking forward to the next. I don’t know about you, but that’s what I’ve been reflecting a lot on this month.

Looking back at 2012, the most significant event was starting a new job with a new train+bike commute. I had lost my job with a perfect commute on tree-lined streets in Palo Alto and was disappointed that my new job was in a more car-centric area of San Jose. But I discovered that riding Caltrain and pedaling the Guadalupe River Trail was far better than expected. My commute went from a solo activity to a social ride on the train and trail.

Plus, it gave us new Bike Date Friday options, from Cirque du Soliel to Oktoberfest at Teske’s. San Jose has much to offer, if you look for its hidden charms and don’t expect it to be like San Francisco or even Palo Alto. I don’t miss my old commute at all, although I still miss my old job and our small and mighty team. We rocked.

In 2011, I made a commitment to stop complaining and start writing letters. In 2012, I not only wrote letters, I spoke up at at City Hall and in the local newspaper. I was really nervous at first and I admit I still get nervous when I speak, but it gets easier each time. I also volunteered on several committees for the Silicon Valley Bicycle Coalition, including a winter party that drew our local bike community together in greater numbers.

In 2012, I launched new short features that lowered the stress of writing longer stories. I kicked off National Bike Month in May with Bike Commute Diaries, 31 days of short posts exploring things I’ve discovered as an everyday bicyclist. In its wake came the Bike Lane FAIL series, the Bike Spotting and A Closer Look bike galleries, a Tumblr called Where’s My Bike Today and a Dear City site for advocacy letters. Phew! 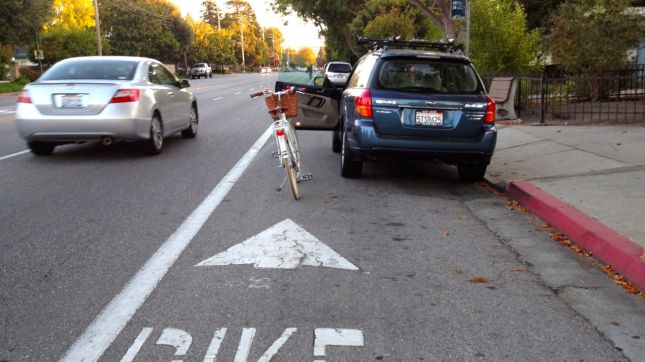 In 2012, I started using Twitter to meet and communicate with other bicycle advocates and enthusiasts. Twitter makes it easy to share news and ideas and get community support when facing bike-related challenges.

Through Twitter I now have new friends, both locally and worldwide. Richard of Cyclelicious was kind enough to model for a Fashion Friday shoot. Emily the Bakfiets Babe invited me to hang with her Portland friends at the fashion show at the Women’s Bicycling Summit. What a RIOT! I really value the mommy biking friends I’ve made. They let me vicariously experience parenthood on bikes, without all the tantrums and spit up. 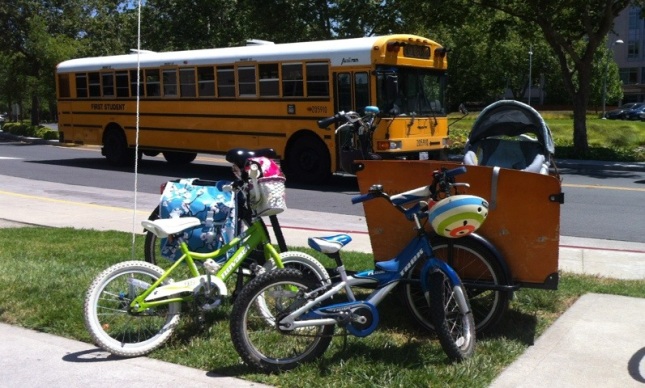 In 2012, I moved forward with my “car-lite” lifestyle, riding my bike to places I had only driven to before, like San Jose airport (and San Francisco airport too). Reducing my driving wasn’t a goal per se, but by the end of the year I racked up only 2,000 miles on my car. I called my insurance company and they reduced my rates.

My friends and I trained for and completed the Solvang Century, the first 100 mile ride I’d done in four years. We followed it with a new challenge: the Peak of the Month Club. We climbed four Bay Area peaks (Diablo, Tamalpais, Twin Peaks, San Bruno) in four counties and still have a few more to finish up in 2013. 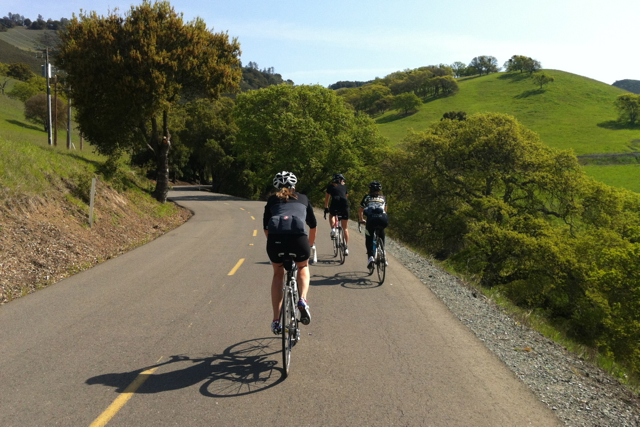 Looking back at 2012, I’m glad that some things didn’t change. I made three trips back home to visit family and got to ride all over town with my dad who’s now 82. He hasn’t slowed down much and he rocks the pasture trail with ease. My husband and I still managed to find new restaurants for our long-running Bike Date Friday tradition. I don’t write about it much anymore, but you can follow me on Instagram to catch the food photos.

Moving forward into 2013, I’m not really sure the year will bring. I want to travel overseas again, like we did in 2011 with trips to Amsterdam, Paris and London. I want to do more long road rides and gain back some technical skills I’ve lost on the dirt. I want to do a longer, multi-day bike+train tour.

I want to push myself to write to a broader audience than this blog. Last year several people nudge me that direction, but I haven’t put myself out there. I also see myself speaking out more for women’s issues in cycling. I’ve written about it some and gotten into a few Twitter fights. But I’ve been biting my tongue a lot.

It’s scary to write this. I don’t like the pressure that comes with setting goals. Besides, the most significant things I’ve done in life were not planned. I’ve always believed in the Third Commandment of Frisbee: Never precede any maneuver by a comment more predictive than “Watch this.” So all I will say now is “Watch this!”

Are there things you achieved in 2012 that you never expected? Do you have any goals for 2013?

Posted by ladyfleur on January 15, 2013 in Other Stuff