I’m not a mom. Unlike Cherie and other parents I’ve been chatting with lately, I don’t have kids that I need to drop off at school in the morning, or to take to soccer practice, swim lessons or dance class in the afternoon. And yet I find cargo and family bikes intriguing, like this Urban Arrow I spotted parked in downtown Palo Alto.

At first glance it looks like just another variation on the traditional Dutch bakfiets (box bike), this time with a hard foam box instead of wood. A closer look reveals much more: a factory electric assist motor. That sounds like a winning combination to me. After all, not all parents are like the unstoppable Emily Finch of Portland, who’s determined enough to carry her six kids and way to much cargo on her box bike.

The passenger box is made from the same high-density foam found in bike helmets.

Like any proper European bike, the Urban Arrow has integrated lights.

The electric motor sits right behind the pedals for stability.

Oops. This isn’t a chain guard. I took photo of wrong side of the bike so no idea whether it’s chain or belt driven.

A classic Brooks saddle adds a classic touch to a modern design.

A generated rear light and lots of reflectors make an impression going as well as coming.

Posted by ladyfleur on October 16, 2013 in Bike Gallery

To anyone out there who still thinks bicycling is a just young man’s sport, guess again. Women loves bikes. Even “women of a certain age” whose parenting is more about waving goodbye to college-bound kids or sharing holiday recipes than changing diapers or back to school nights. Sometimes all it takes to get them on the road is a little encouragement, like having a friend to ride with. Point them to a fun group ride and they’ll ride in like the cavalry.

That was what I discovered (yet again) last weekend on a women’s ride hosted by the Silicon Valley Bicycle Coalition. I had heard the organizer Candice wasn’t really sure if she’d have four or 40 women show up. Since she recruited at least a half dozen helpers, her low estimate was too conservative. So was her high estimate. I counted 50 just before we divided into three groups and headed across downtown San Jose. Our destination: the old port town of Alviso, a 20 mile roundtrip via the Guadalupe River Trail.

I rolled out with a faster group of about a dozen led by Marnie, a charity ride junkie who spins a yarn as fast as she spins her wheels. We stopped for the lowdown on the sights along the way, from the “Hands” mural on the parking garage at San Jose Airport to the site of the Lupe the Mammoth fossil unearthed on the river a decade ago to the cannery and salt flats at Old Alviso.

The ride was a delightful spin on a lovely day filled with female camaraderie. But like many events, it was the after-party that made the news. Instead of taking us back to the fountain plaza where we started, Marnie led us straight to her house in Naglee Park where recovery drinks and food were waiting. For this demographic, that means wine, fruit and cheese. No one complained about the change in direction. 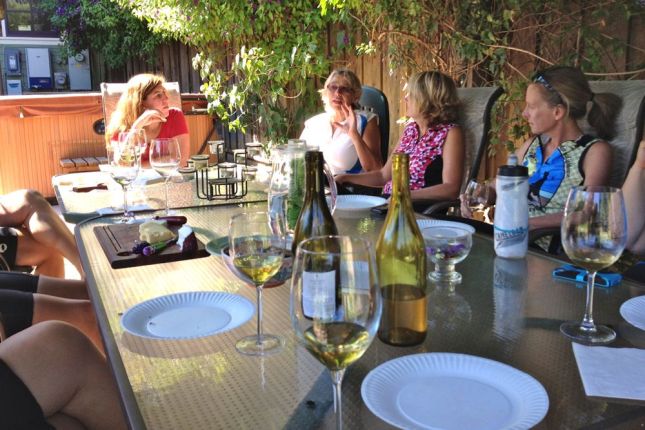 As we chatted over our recovery drinks, I learned more about the wide range of women in my group. Many were local to San Jose, but others had trekked in from the Peninsula and East Bay. Some were new to group rides, most had cut their teeth in women’s groups with names like Feather Pedals and Velo Girls.

A few, like me, were daily commuters, but most were strictly recreational riders, with a strong showing of the charity ride regulars. The most commonly cited reason for not running errands on their bikes? They couldn’t bear the idea of leaving their “babies” unattended.

Some came to the sport as a gentler alternative to running, others hadn’t really exercised in years before they started cycling. There was discussion over what being a “cyclist” meant. To one woman, a bike rider earns the title “cyclist” when she starts wearing cycling jerseys. Another was quick to say she didn’t consider herself a cyclist, despite the jersey on her back. She didn’t explain why before the conversation turned.

While most were old enough to have college-age kids, there were young’uns along for the ride and the fellowship which knows no age. A shared love of bikes is usually all it takes to bring women together.

Will you travel far to join a group ride? If so, what makes it worth going the extra distance?

Posted by ladyfleur on October 15, 2013 in Backroads, Women & Bikes

When your title is “stay at home mom” but there’s little staying at home about the job, you need a style that can take you from school pickup to the grocery store to the playground du jour in parks all over town. In a peasant blouse, tank top and full skirt, Cherie makes it all look easy on her long-tail family bike.

Cherie lives with her husband and two lovely children across the expressway from downtown Mountain View.

Sporty sandals are fine for the easy trips. For bigger loads on hillier routes, Cherie flips the pedals and clips in.

Talk about having full range of motion! The gores in her godet skirt add width, volume, swing and kick.

Posted by ladyfleur on October 11, 2013 in Cycle Fashions

When you travel down a street at 10 mph in the open air instead of boxed inside a car moving 30 mph, you’re bound to notice more. Last week I was rolling through Palo Alto’s Professorville neighborhood on my way to meet a girlfriend for dinner downtown, and out of the corner of my eye I saw something jutting above a picket fence. Mounted on a post with a steep A-line roof, it was too large to be a mailbox.

I pulled over to investigate. The sign said “Little Free Library.” Inside was a small collection of books protected behind a glass door and instructions that simply said to take a book and return it when you’re done.

Little did I know that know that Little Free Libraries are found worldwide, on every continent except Antarctica. The first little free library was built in 2009 by Todd Bol of Hudson, Wisconsin as a tribute to his mother, a former schoolteacher who loved reading. He placed on a post in his front yard with a sign “Free Books.”

It was so popular he built more and gave them away for other locations. The concept took off. In three years they met their initial goal of 2500 Little Free Libraries and by January 2014, they expect to pass 10,000.

I checked their map for ones near me and found two that weren’t far out of the way of my daily commute: one in front of an Victorian in downtown San Jose and one in front of a suburban ranch-style home in Mountain View.

Now I want one. Given I live in a managed neighborhood, I don’t know where I can put it and be in compliance with the association rules. But I have a father who’s really handy in the woodworking shop and is always looking for new projects. And what design? Would I go with a red British phone booth? A Scandinavian cottage? Or maybe a Cajun shack made of reclaimed materials like my cousin’s chicken coop?

Posted by ladyfleur on October 10, 2013 in Around Town, Family Rides

You and your friends are invited to a Art Lovers City Cruise and Picnic on Saturday, October 19, 2013. Tour rolls out from the Caltrain Station in downtown Menlo Park, California at 10:35 am.

Art is best savored at a slower pace, by walking through a gallery or through a sculpture garden. When public art is sprinkled all over town, the whole city becomes an art museum and your bicycle lets you wander from gallery to gallery at a leisurely pace. On a bike, it’s easy pull over, hop off and reflect.

This 10 mile city cruise rolls through low traffic, relaxing neighborhoods in Menlo Park and Palo Alto sampling public art and then heads into Stanford University, home the world’s second largest collection of sculptures by Auguste Rodin. Twenty large bronzes, including Rodin’s massive “The Gates of Hell” grace the sculpture garden at the Cantor Center on the Stanford campus. But this is just one of three art sites we’ll visit. 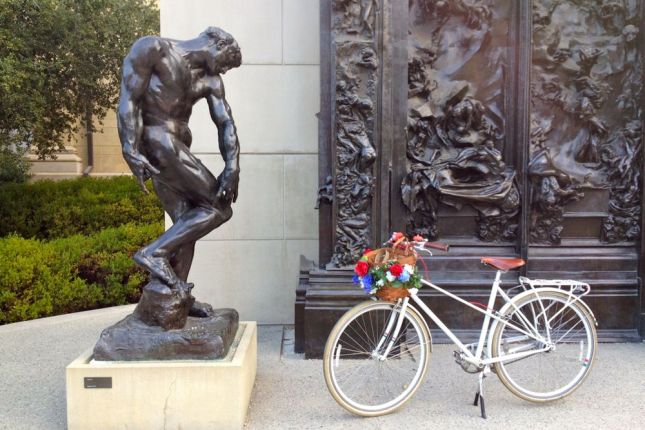 The agenda is simple: we’ll cruise, stop, gaze, reflect, chat, and then picnic at the well-shaded tables at the Rodin Garden. We’ll have an artist or two along for a little color commentary and give us a little insight into the mind of an artist. So pack a picnic lunch, grab your favorite cruising bicycle and join us.

Burghers of Calais by Auguste Rodin

Posted by ladyfleur on October 9, 2013 in Around Town

If Laurel Street in Menlo Park is 42 feet wide, how do you divide the roadway so everyone gets what they need? Or should some people’s needs get higher priority than others?

The northbound bike lane on Laurel Street is filled with kids and parents on their way to school every morning.

The existing bike lane is wide enough for car parking, which is legal at night and all day on weekends.

Parking is legal there except for 7-9am weekdays. After 9am, parents stop for drop-off and teachers park all day.

On the southbound side there’s a relatively narrow parking lane and a door zone bike lane.

Twelve feet isn’t enough for an SUV plus a bike lane, much less an RV.

How do you think the 42 feet of roadway should be shared?

There’s a neighborhood meeting on Thursday, October 3 in Menlo Park where they’ll discuss prohibiting parking all day in the morning-only bike lane near Nativity School, a proposal that’s expected to be unpopular with the school’s parents and teachers. If you think safe bike travel is more important than parking, please speak up at this event or contact Jesse Quirion at (650) 330‐6744 or jtquirion at menlopark.org.

Posted by ladyfleur on October 1, 2013 in Bike Lane FAIL