If you don’t know me in real life or follow me on Twitter you may not realize how much I spend at planning meetings in my city. It’s not fun, believe me. I’m there because the people who make important decisions have a hard time seeing things from non-Baby Boomer perspective. I speak up in the hope that a different point of view will be considered. Last week I was honored to be asked to write an opinion piece on Caltrain and bikes by the editor of the Mountain View Voice. Here it is, as it appeared in the May 23 print edition, now available online.

All it takes is a trip downtown at 6 p.m. on a weeknight to see the changes. Bikes overflow the racks on Castro Street and are locked to every available tree and post. Crowds of people cross Central Expressway on foot and on bikes with each signal cycle. The Caltrain platform teems with riders pushing their way onto trains that are standing room-only by the time they reach Palo Alto.

This is not just casual observation either. Caltrain recently released the results of their passenger counts and triennial customer survey: ridership is at an all-time high with a 54% increase since 2010; ridership growth continues to strain capacity in peak periods; and all but one station saw growth. Caltrain sees this growth as a sign of continued economic recovery, as would anyone who fights workday traffic on Hwy 101 can attest.

Much of Caltrain’s growth comes from bikes. The number of people bringing bikes aboard has grown a whopping 121 percent since 2010, more than double the overall ridership growth rate. While the growth is partly due to Caltrain adding a second bike car to every train in 2011, bike-aboard ridership has continued to increase, up 19.6 percent last year. This year bike-aboard riders make up over 11 percent of all riders, making Caltrain the nation’s leader in bikes-on-transit.

And yet, despite a capacity of 80 bikes on most trains, people with bikes are still regularly denied boarding due to overcrowding, primarily in Peninsula cities from Millbrae to Mountain View. That’s how popular the service is.

What’s more, how people arrive and depart stations is rapidly changing. While walking to reach stations has increased modestly by 7 percent since 2010, taking transit (VTA, BART, Muni or shuttles) is flat at 4 to 7 percent. The most dramatic changes are that driving to and parking at stations has dropped by 24 percent and bicycling to the station is up 30 percent. And that’s just the last three years.

So what does this mean? It means that some commonly-held assumptions that we’re too suburban to rely on walking, biking and transit, and that people won’t shift from solo driving, are wrong. People already are. In fact, 40 percent of Caltrain riders report they are car-free and that doesn’t include “car-lite” riders like me who own a car they rarely use.

Today’s transit-dependent riders are not low-income either. The average Caltrain rider makes $117,000 a year. Most riders are making a conscious choice to not drive that’s not simply driven by economics. It’s driven by a desire to escape wasting time driving in traffic. 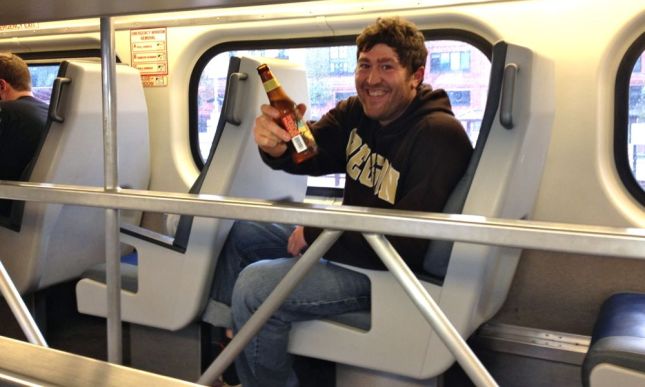 For Caltrain, it means recognizing that for many riders, bikes are the most convenient first and last mile solution, faster than shuttles for trips up to 3 miles when there’s congestion, and cheaper than car parking at stations, both for the rider and for Caltrain. It means ensuring that bike capacity of new electrified trains is at least 10 percent of total capacity. It means expanding bike share into office areas like North Bayshore and into popular housing areas like the Mission in San Francisco.

For cities, it means not spending money on expensive parking garages that will bring more vehicles into congested areas, and instead improve walking and biking connections to existing and emerging office and housing areas like San Antonio Center and El Camino Real. It means implementing Transportation Demand Management programs (TDMs) like Stanford did, with incentives that go beyond shuttles to include benefits for people who take transit, bike, walk, carpool or drive at off-peak times. And consider charging for parking at office sites. It’s hard to compete with free.

Times have changed and people are showing they want options other than driving. How will we invest to support them?

In your city, is vehicle traffic heavier with the economic recovery? Is your city investing in bicycling, transit or widening roads to accommodate more cars? What would you like your city to do to improve transportation?

Posted by ladyfleur on May 28, 2014 in Issues & Infrastructure

Every morning on my way to work I roll past the beautiful San Jose Heritage Rose Garden. This spring I’ve been too busy with Bike to Shop Day, fighting for bikes in the El Camino corridor and launching new products at work to stop once (and I’m not done yet). Today I stopped anyway. The hybrid tea roses and the grandifloras are spent, but the floribundas are still going strong. I smelled the floribundas, then rolled on to get back to work.

About the Bike Commute Diaries: Launched in May 2012 for National Bike Month, this series explores the unexpected and surprising things I’ve seen and learned while bicycling for transportation.

Posted by ladyfleur on May 19, 2014 in Commute Diaries

It’s easy to have fun hunting for bike-friendly fashions when you have bike-friendly businesses near home. All I need is a new flowery sundress, lacy red sandals and some critical accessories and I’m ready to shop ’til I drop on our first-ever Bike to Shop Day here in Silicon Valley. Let today’s bike shopping extravaganza begin!

This is my third, yes, third dress from Boutique 4 in Mountain View. Just as comfy as my power dress.

I searched high and low for these cute sandals by Earthies. I just needed to go to the Footwear etc in Sunnyvale.

Layers of necklaces disguise my essential reading glasses. Have you noticed that gold is coming back in?

Necessary accessories for today’s tour: coffee mug, water bottle, and a backpack bag in case I buy too much.

Irish-Americans have St Patrick’s Day, Mexican-Americans have Cinco de Mayo, Cajuns have Mardi Gras and bike commuters have Bike to Work Day. The theme for the festivities at the SVBC Bike Away From Work Party this year was “Dress Like Your Bike.” For a classy, vintage-inspired bike like Susie Q Public, that meant giving a nod to Jackie Kennedy in a pill box hat, Chanel-style jacket, classic pumps and kidskin gloves. 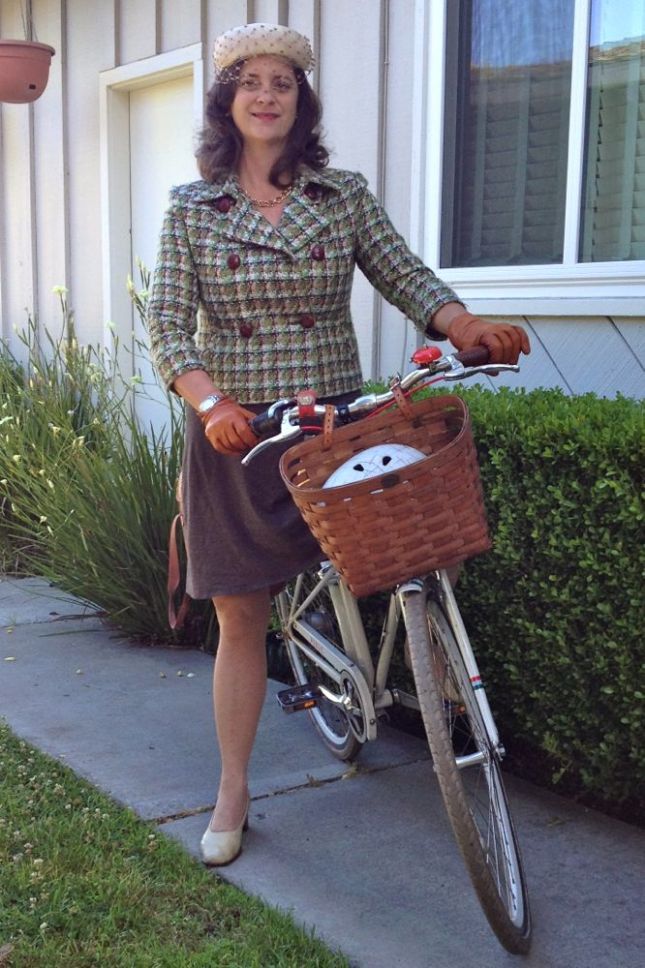 Only a few people at the party dressed for the theme (like Winona, Dick & Jill) but who cares? We had fun.

The beauty of the double breasted jacket: button it up for the chill, open it as you warm up on the ride.

For the past few months, I’ve put my heart and soul into Bike to Shop Day. With an amazing team of volunteers and staff at the Silicon Valley Bicycle Coalition we’ve built a web site, recruited local businesses, printed, translated and delivered posters and written press releases promoting this one-day event.

We’re down to the home stretch now. All we need is people like you to hop on your bikes to shop, dine and do errands on Saturday, May 17. If you’re in Silicon Valley, we’d love it if you stopped in at our participating businesses or joined one of our shopping tours described below. If not, just knowing that you’re shopping by bike, wherever you are, will put a smile on my face. And that smile will be even bigger if you send me photos.

Want to try shopping by bike in a new neighborhood? Or just want to meet other bike shoppers in your area? Join one of our three Bike to Shop Day tours in two Silicon Valley cities. Each ride has its own distance, style and shopping districts visited, but all are designed to let you ride a little, shop a little, ride a little, eat a little. Stops will be oriented to allow you to visit businesses offering special Bike to Shop Day incentives. 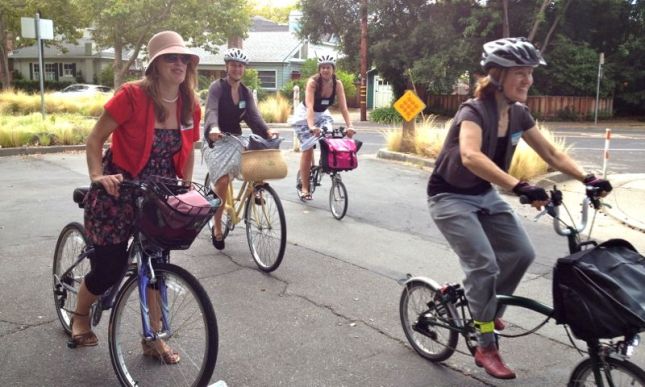 When we get to Willow Glen, I’m hitting Mariette Chocolates first. Their sea salt caramel chocolates are divine.

A visit to Japatown is not complete without a stop at Nichi Bei Bussan, a family-run Japanese goods store.

Japantown is home to many small businesses, like this tiny shop appropriately named Petitie Galleria.

At the stop downtown, you can pick up San Jose logo items, including Sharks team jerseys.

Mountain View Kid-Friendly Tour. Starts 10 am at the Mountain View Public Library and cruises 2.5-3 miles. At the library, pump up your tires at the new bike repair station and pick up your goody bag, then cruise over to Diddams for special kid-friendly offers. Then roll downtown to finish with an ice cream stop at Ava’s Market and shopping on Castro Street. Family-oriented route chosen by and tour led by a League of American Bicyclists Certified Instructor. Tour leader: Winona Hubbard.

The Kidical Mass tour is perfect for kids of all ages, on their own bikes or carried on or pulled by their parents.

The tour stops at Diddams, where toys and games and stickers and candy makes it’s a kid’s delight.

The ride ends with ice cream and/or sandwiches at Ava’s Market, which has outdoor seating on Castro Street.

All rides are free and open to all ages. Please RSVP through the Silicon Valley Bicycle Coalition so we can plan to have enough ride leaders to keep the tour safe and pleasant for everyone.

There’s nothing subtle about fashions for spectators at horse races, starting from the top down with the signature Kentucky Derby hats embellished with any manner of flowers, feathers and figurines. A simple white lace dress (a strong trend this season) creates the perfect backdrop for a bold flower necklace and a flouncy wide-brimmed hat in red organza. What am I betting on? That I picked a winning combination.

The flare skirt of a fit-and-flare dress means I can pedal in comfort.

Yes, the necklace is way over-the-top. That’s why it works so well with the hat.

Nothing says summer like a straw bag adorned with leather flowers.

Posted by ladyfleur on May 4, 2014 in Cycle Fashions